On December 11, 12 and 13, the American Corner of the National Palace, with the support of the US Embassy, ​​hosted an online international conference about Women, Peace and Security 2020, The conference was dedicated to the 20th anniversary of UN Security Council Resolution 1325 and aimed to promote the growing role of women in the defense sector.

The opening ceremony of the conference on December 11 was attended by the Director of the National Palace Tinatin Rukhadze, the Coordinator of the National Palace, Tbilisi American Corner Natela Urushadze, Press Attaché of the US Embassy in Georgia John Ferry, Head of the NATO Liaison Office in Georgia, Dr. Rosalia Puglis , Ambassador of Georgia to the Republic of Bulgaria and Northern Macedonia Tamar Liluashvili, UN Women Analyst Tamar Lobzhanidze Dr. Robert Phillips, Professor at the American University of Bulgaria and Academic Director of the UN Club, Lela Akiashvili, Advisor to the Prime Minister of Georgia on Human Rights and Gender Equality.

On the second day of the conference there will be three student discussion panels on the following topics:

Future leaders from Belgium, Bulgaria, Romania, Belarus, Spain, Kazakhstan, South Africa, Albania, Kosovo, Austria and Georgia delivered a ten-minute speech at the student panels.
Student speakers from the Institute for National Democracy, Swiss Peace, the Fletcher School of Law and Diplomacy, the US Embassy, ​​the NATO Liaison Office, the International Women’s League for Peace and Security (WILPF), and others were also invited to the student panels.

Report of the National Palace at Tbilisi City Assembly

The annual report of the National Palace was discussed in Tbilisi City Assembly. The meeting of ..

An innovative platform for film education for young people

The National Palace and the Culture and Education Foundation present a project, an innovative f ..

Memorandum of Understanding was Signed between the National Palace and Ilia State University on ..

The first concert of 2021 of the Tbilisi Youth Orchestra 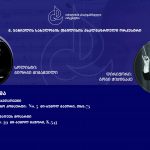